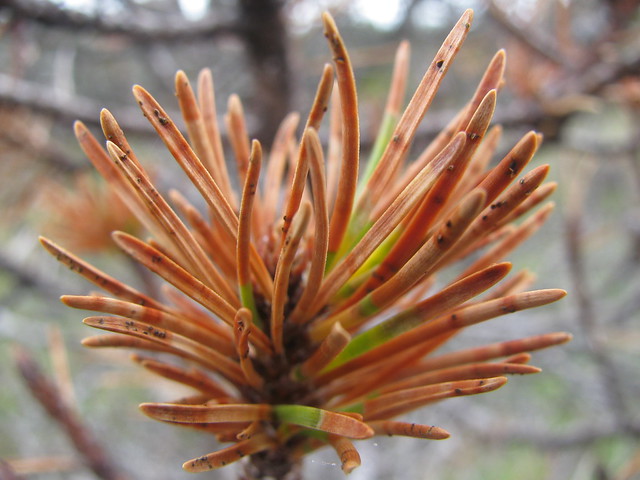 Dothistroma needle blight occurs throughout the range of shore pine in Alaska. In 2021, there was a slight uptick in disease detection. During the aerial detection survey, discolored shore pine crowns were observed near Skagway by the Dewey Lakes trail system and on the western shore of Taiya Inlet below Face Mountain. The damage will be ground checked in 2022. Consecutive rainy days and temperatures greater than 62°F are linked to outbreaks. The dry weather in 2018 and 2019 inhibited disease spread, resulting in negligible disease in 2020. Abundant precipitation and slightly elevated temperatures in 2021 may facilitate worsening damage next year. Notable tree mortality has occurred in Alaska during localized, prolonged outbreaks. An outbreak near Gustavus, AK in 2010-2016 killed 57% of shore pine and left dominant trees with foliage only in the upper 1-3 ft of tree crowns in monitoring plots in heavily affected forests. Dr. Renate Heinzelmann at University of British Columbia continues to evaluate genetic differences between Dothistroma isolates collected across western North America, including Southeast Alaska, and has partnered with PhD student Barbara Wong from Université Laval to assess how temperature and moisture regime influence isolate growth on nutritional media.

Dothistroma needle blight causes varying levels of premature needle shed throughout the range of shore pine in Alaska (Distribution Map), but does not typically cause tree mortality. If ideal disease conditions become more common, this could result in more frequent, prolonged and severe outbreaks. Outbreaks in managed lodgepole pine forest in British Columbia have been linked to climate change.

Low to moderate levels of disease causing limited damage are common throughout the range of shore pine in Alaska. The severe outbreaks near Gustavus, Haines, and Skagway, AK are thought to be unprecedented for Alaska. The Dothistroma needle blight outbreak near Gustavus and Glacier Bay National Park (GBNP) that began around 2010, affecting at least 11,000 cumulative acres, has caused significant damage and mortality to shore pine (Pinus contorta subsp. contorta). The bulk of shore pine mortality occurred between 2013 and 2015. Nine permanent plots established in outbreak areas near Gustavus in 2016 found 57% of shore pine trees and 34% of the pine basal area to be dead. Smaller pines were more likely to die, but surviving dominant and co-dominant trees often only retained live foliage in the upper 1-5 feet of the tree crown. In 2017, few Dothistroma fruiting structures were observed on shore pine and mortality rates had slowed, indicating that the outbreak may have run its course. Evaluation of weather data from Gustavus identified a prolonged wet period with temperatures greater than 62°F in late-July 2009 that likely precipitated the outbreak.

In 2016, about 2,200 acres of severe Dothistroma needle blight crown damage was aerially detected in northern Lynn Canal in 2015 and 2016, primarily along the Chilkat River between Haines and Klukwan, and from Skagway north along the Taiya River. The outbreaks near Haines and Skagway decreased in severity without causing significant pine mortality (8 permanent plots established in Haines in 2015/16 were revisited in 2017). Shore pine regeneration was observed in some affected stands, likely associated with stress cone production triggered by the outbreak. A few other places in Southeast Alaska are known hotspots for Dothistroma needle blight, particularly localized muskegs near Juneau (Pt. Bridget State Park and Douglas Island) and Sitka (Gavin Hill Trail).

Dothistroma needle blight affects a wide range of pine hosts worldwide. It occurs throughout the range of shore pine in Southeast Alaska, where wet, mild summers are conducive to many conifer foliage diseases. The causal fungus produces black, pimple-like fruiting bodies and orange-red banding symptoms on needles in spring and early summer. Diseased trees may have sparse crowns and reduced growth from premature needle shed.

This native disease does not usually kill trees; however, multiple years of severe disease can cause substantial tree mortality, as observed near Gustavus. The species of Dothistroma present in Southeast Alaska has recently been confirmed as Dothistroma septosporum (Dorog.) M. Morelet in partnership with Drs. Irene Barnes and Mike Wingfield at the University of Pretoria in South Africa. Dothistroma septosporum population genetics, including samples from Southeast Alaska, are being evaluated by colleagues at the University of British Columbia.

The combination of mortality and limited regeneration is likely to reduce the abundance of shore pine in the flatland pine-spruce-cottonwood forests near Gustavus. Monitoring plots installed near Haines and Gustavus in 2015/2016 will allow us to track disease severity, tree survival and changes in forest composition. The long-term impacts will depend on the duration of these outbreaks. Where substantial mortality occurs, we expect potentially different compositional changes in stands that contain other tree species that may be poised to replace shore pine compared to stands with limited tree diversity.

Severe outbreaks can be mapped by aerial survey. Ground-based plots have been established in severe outbreak areas identified since 2012. Monitoring transects established near Gustavus in 2013 and revisited in 2014 revealed that over half of the shore pine trees in severely affected areas are dead and that many monitored trees succumbed to disease from 2013-2014 (~60% of the 204 severely diseased trees flagged for monitoring died within one year). Nine permanent plots were established near Gustavus in 2016 to allow us to more closely track disease severity and tree mortality. In these pine-dominated plots, 57% of shore pine trees and 34% of the pine basal area is dead. When plots were revisited in 2017, additional mortality was detected but the rate of mortality had slowed. Many of the surviving pines had greatly reduced crown heights due to branch dieback from the disease. For more detail, see the Biological Investigation Report. Eight permanent plots were also established near Haines in 2015 and 2016.

Georeferenced observations of Dothistroma needle blight in Alaska as of 2021 from
permanent plots, aerial survey and informal observations, with the modeled distribution
of its host, shore pine. The shore pine distribution was developed by the Forest Health
Technology Enterprise Team (now FHAAST) in 2011, 240m-resolution, based on dominant
tree species by tree diameter.