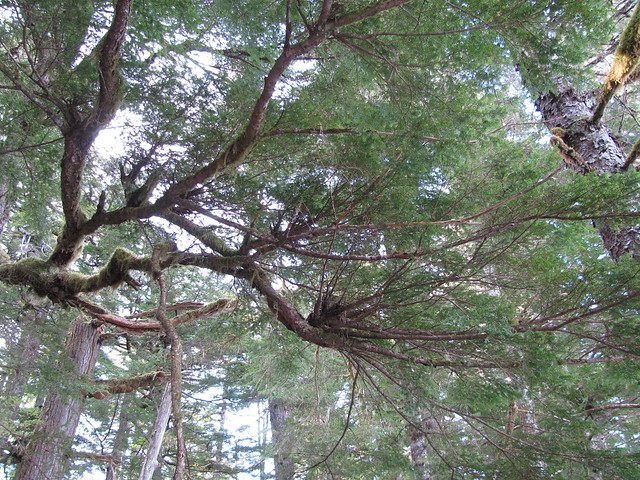 The incidence of hemlock dwarf mistletoe does not vary noticeably between years, but we made six observations of the disease in Juneau, on the Chilkat Peninsula, and on northern Admiralty Island. Additionally, six research grade observations were contributed through iNaturalist near Sitka; each record included beautifully detailed photos of dwarf mistletoe shoots. Hemlock dwarf mistletoe is uncommon above 500 feet in elevation and 59°N latitude (Haines, AK) and is absent from Cross Sound to Prince William Sound despite the continued distribution of western hemlock (see Detection Map). Hemlock dwarf mistletoe is one of seven disease examples that we presented to demonstrate how a conceptual framework based on the plant disease triangle can be applied to better understand how climate change may influence tree disease behavior (Hennon et al. 2021, https://onlinelibrary.wiley.com/doi/10.1111/efp.12719). Other examples from Alaska include Dothistroma needle blight and yellow-cedar decline.

The pathogen is spread by explosively discharged seeds coated in a natural adhesive substance (viscin) that allows them to stick to host branches up to 50ft away. Mistletoe growing high in the overstory commonly infects understory trees. Infection occurs after seeds overwinter on tree bark, then germinate and penetrate the tree's vascular system to obtain water, nutrients and sugars. Successful infection, shoot production and seed dispersal takes several years, with the specific length of time dependent on climate, canopy position and other factors.

Dwarf mistletoe brooms increase habitat and species diversity by providing nesting platforms and structures for wildlife, creating canopy gaps, and serving as infection courts for decay fungi. Canopy gaps are created where overstory trees are killed, allowing mid-canopy trees (including those with mistletoe infection) to release to the overstory. Understory trees may have substantial mistletoe infection if they have been subjected to overhead inoculum (seeds) for many years or decades. Nevertheless, most infected trees will successfully grow into canopy gaps, where they may provide a source of inoculum to nearby trees. These dynamics allow for the perpetuation of dwarf mistletoe in mixed-age forests following its initial establishment. Short-distance spread is driven by seed dispersal between adjacent trees, while long-distance migration is attributed to birds (seeds sticking to feathers).

See the synthesis report by Muir and Hennon (2007) for more detailed information.

The incidence of hemlock dwarf mistletoe changes little from year to year without active management. On the Tongass National Forest, removal of mistletoe-infected residual saplings (mistletoe sanitation) after clearcut harvest and prior to pre-commercial thinning was a common treatment in the 1970s and 80s to prevent infection in developing young-growth stands. This practice was discontinued because, without treatment, trees were shown to outgrow infection (height growth of trees surpassed the vertical spread of dwarf mistletoe). See the synthesis report by Muir and Hennon (2007) for more detailed information.

Our knowledge of hemlock dwarf mistletoe distribution comes from the U.S. Forest Service Forest Inventory and Analysis plot network, as well as informal ground observations. Forest Inventory and Analysis plot data may disregard hemlock dwarf mistletoe when present at low levels or when other damages are present, so extent of the disease is likely underestimated.

Trummer et al. (1998) installed research plots on Kuiu Island (78) and Chichagof (18) Islands to evaluate mistletoe spread patterns following partial disturbance from a high-severity wind event in the 1880s. Stem maps were produced in these stands depicting the size, species, live-dead status and dwarf-mistletoe rating of trees to determine how far mistletoe had spread into stands from relic infected western hemlock trees. This work produced and validated a model that predicts the dwarf mistletoe rating in the mature stand based on the basal area and dwarf mistletoe ratings of large and small residual trees. Hennon and McClellan (2003) evaluated the incidence of hemlock dwarf mistletoe on live and dead trees in 27 old-growth forests at three locales in Southeast Alaska (Hanus Bay on Baranof Island, Portage Bay on Kupreanof Island, and Lancaster Cove on Prince of Wales Island).

Dwarf mistletoe infection severity is quantified using a visual rating system (Hawksworth 1977). The live tree crown is visually divided into three equal vertical sections, with each section assigned a rating of 0 (no visible infection), 1 (one-half or fewer of the branches are infected), or 2 (more than one-half of the branches are infected). Inspection often requires the aid of binoculars. The scores for each one-third of live crown are then summed for an overall dwarf mistletoe rating (DMR) of 0-6. For hemlock dwarf mistletoe, detectable growth loss is observed when infected trees receive moderate ratings of 3 or greater. The risk of tree mortality increases with severe DMRs of 5 and 6.

The apparent elevation and latitude limits of hemlock dwarf mistletoe relative to that of its primary host, western hemlock, suggest that climate may limit the distribution of this pathogen. For more about this topic, see Hennon et al. 2011 (pp. 74-78)  and Barrett et al. 2012.

Georeferenced observations of hemlock dwarf mistletoe (Arceuthobium tsugense) in Alaska as of 2021 with the range of its host, western hemlock (Tsuga heterophylla). Pathogen observations are from Forest Inventory and Analysis plots, other plot systems, and ground observations. The modeled distribution of western hemlock was developed by the Forest Health Assessment and Applied Sciences Team (formerly FHTET) in 2011 (240m-resolution, presence based on dominant tree species by tree diameter).