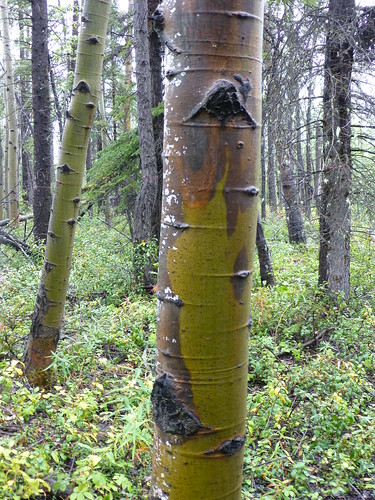 Aspen running canker is an aggressive canker disease that can rapidly kill the cambium of aspen trees as it spreads along tree boles. In intermediate-aged to mature stands, infections can girdle and kill smaller, understory trees within a single season. Because it is so widespread and often found far from roads and population centers, this disease is most likely caused by a native pathogen that is favored by current conditions (host susceptibility or environment). Since it was first noted in 2015, this disease has been mapped throughout the boreal forest of Interior and Southcentral Alaska.

We completed a study with Dr. Roger Ruess (University of Alaska Fairbanks) initiated in 2016 to understand the main factors influencing disease distribution and tree responses to infection. A shading experiment is still underway to test the hypothesis that vigorous, open-grown saplings have defenses to combat the disease. Specifically, we're looking at differences in gene expression between diseased and healthy trees to evaluate the type of host defenses (constitutive vs. induced) involved in disease resistance.

Beginning in 2015, the BNZ LTER inventoried all permanently-tagged aspen trees within intermediate-aged stands (40-60 years old) in the Regional Site Network (RSN) in Interior Alaska. The RSN was established to monitor long-term changes in forest composition and function in response to changes in fire regime. Whether this large amount of aspen mortality is a sudden phenomenon, has been slowly increasing, or remains in a static state is unknown. The BNZ LTER is well positioned to study these dynamics over the next several decades.

The canker is often subtle in appearance, although sometimes colorfully orange, and can girdle and kill trees within a single season with no apparent host defenses. It is called running canker because it rapidly kills cambium as it expands along nearly the entire bole. Most infected trees die within the year as the tree is girdled. We initiated a joint venture agreement with Dr. Roger Ruess (University of Alaska Fairbanks) in 2016 to conduct research to gain a better understanding of disease distribution and the factors influencing disease spread. We have been working to identify the causal fungus over the past few years. Vertically elongated cankers ‘run’ along the bole and can girdle and kill trees within a single season. Canker-killed aspen can often be seen from the road system of Interior Alaska.

Estimates from 2016 indicate that up to 50% of the aspen biomass within the Bonanza Creek Long-Term Ecological Research (BNZ LTER) intermediate-aged stands is infected with canker. Across stands, up to 65% of aspen trees had cankers, and most of those trees were dead. This data is presented in Figures 7 and 9 in the Forest Health Conditions in Alaska 2016 report. We suspect values for percent incidence in live trees are conservative given the difficulty in detecting canker within the upper canopy and the extended latent phase of most diseases.

In 2017, we evaluated 78 study sites across five ecoregions. We found canker at 81% of the sites. The percentage of infected trees at sites with canker ranged from 1.5% - 64%. Among the five Alaska boreal ecoregions in which we sampled, disease was significantly higher north of the Alaska Range compared to the two ecoregions south of the Alaska Range (Cook Inlet Basin and Cooper River Basin). The highest levels of disease were found in the Tanana-Kuskokwim Lowlands, with significantly lower infection rates in each of the other four ecoregions (Cooper River Basin, Cook Inlet Basin, Yukon-Tanana Uplands, Ray Mountains). Canker infection incidence was higher on smaller diameter trees, and increased with stand-level aspen basal area and density, and average aspen diameter at breast height (which is our best indicator of stand age). Smaller diameter trees in older stands were particularly vulnerable to the canker, and most were dead from the disease. However, small diameter trees in young stands were almost completely devoid of canker. There are a number of potential reasons for this, and we initiated an inoculation experiment last summer to explore whether these young trees are immune to the canker, due perhaps to higher levels of chemical defense, or whether they are simply not getting the disease, perhaps due to low levels of wounding compared with similarly-sized trees in older stands. In 2018, we also installed a shading experiment. Interestingly, smaller diameter trees in older stands may be “carrying” the disease and increasing infection incidence in older trees, since older trees in mature stands without a similar small-diameter cohort have very low canker incidence.

Over the next couple of decades, we anticipate that loss of aspen canopy in intermediate-aged stands in the interior will release white and black spruce growing in the understory. Most of these stands are mixed conifer/hardwood, and spruce is currently limited by shade and snowshoe hare browsing. Release of spruce will ultimately reshape stand structure and ecosystem function. Aspen abundance on the landscape has been expected to increase with a shift in the fire regime towards larger, more severe fires that burn through organic layers and expose mineral soil. This would create a more favorable substrate for hardwood seedling establishment. If the current canker outbreak persists, the successional dynamics of these post-fire stands is uncertain, particularly on drier slopes where aspen dominates. In contrast, birch dominates in wetter soils.

Observations are periodically made during field reconnaissance. Plot-based surveys for aspen canker diseases commenced in 2017 on long-term forest inventory plots. In 2018, we surveyed 158 miles of the remote upper Yukon River between Circle and Eagle. This is the first effort to document aspen running canker outside of the road system. Now that we have many georeferenced canker sites, we have been able to determine the aerial signature for aspen running canker and have begun mapping this disease in the aerial detection survey. We began mapping this disease in the aerial detection survey in 2018.

Click on the map image for a larger version.

Aspen running canker (Neodothiora populina) detection locations in Alaska based on plot data and informal geo-referenced observations as of 2021. Modeled aspen distribution was developed by the Forest Health Technology Enterprise Team in 2011 (240m-resolution, presence based on dominant tree species by tree diameter).