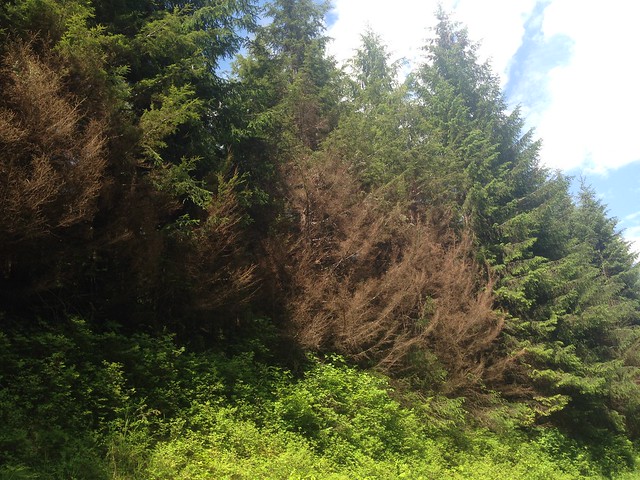 Caused by an unknown fungus

There was negligible active hemlock canker damage in 2019-2021. A significant hemlock canker outbreak occurred throughout Southeast Alaska from 2012-2016, with the most substantial damage mapped through roadside surveys on Prince of Wales Island (see Map). Hemlock canker causes synchronized tree and lower branch mortality along forest edges and can only be aerially mapped when it occurs along coastlines. Recent outbreaks have persisted longer and been noted farther north (Juneau and Cordova) and farther from roads than past reported outbreaks.

Over the last several years, live tree inoculation trials have been conducted in collaboration with Dr. Gerard Adams at the University of Nebraska to determine the causal fungus. In June 2018, more than 500 live hemlock saplings were inoculated with 12 fungal isolates and a control treatment near Juneau. Lesion development was measured in 2019 and several top pathogens caused consistently larger lesion development than the control treatment. The pathogen that caused the largest lesions was Pezicula livida (or a closely related species), followed by Allantophomopsis tsugae, Discocainea treleasei, Chalara sp., Dermea sp. and Caliciopsis sp. Identification of our Pezicula and Dermea isolates to species will require DNA sequencing of at least four different genes and may yet remain as unnamed species (not previously collected and molecularly identified).

Hemlock canker causes synchronized mortality of small and medium western hemlock trees and lower branches of large trees. Diseased mountain hemlock have rarely been observed in severely affected forests dominated by western hemlock. Symptoms include bark lesions, bleeding or resinous cankers, and branch or small tree mortality; the disease usually does not kill large trees greater than 14 inches in diameter. Disease behavior suggests it is an aggressive, annual canker, rapidly expanding in host tissue during one or two growing seasons to girdle branches and tree boles. This disease is most often seen along roads and natural openings (along creeks and shorelines), with most symptomatic trees within 100-300ft of roads or openings. The microclimate in openings probably contributes to disease spread or development. Road dust was thought to be a predisposing factor in the 1990s, but outbreaks continued to occur along gravel roads that were subsequently paved. Resistant tree species (spruce and cedars) may benefit from reduced competition in affected stands, and wildlife habitat may be enhanced where hemlock mortality promotes increased herbaceous vegetation in the understory. In some cases, hemlock canker has extended far from roads into thinned young-growth stands killing intended crop trees, but normally disease does not have a large impact on timber production or forest management.

Hemlock canker outbreaks have been documented one to two times per decade on Prince of Wales, Kosciusko, Kuiu, and Chichagof Islands in southeast Alaska. In the early-1990s, a theory emerged that road dust might contribute to disease development. Dust was observed to reach approximately the same maximum height in the tree crown (about 40-50 feet) as the disease symptoms. However, disease has continued to occur along roads upgraded from gravel to pavement, and in forests far from roads. In the 1980s and 1990s the causal pathogen was tentatively identified as Xenomeris abietis, but this was never confirmed through inoculation trials.

The outbreak that began in 2012 prompted renewed study of this disease because the causal agent had never been conclusively identified. In 2012 and 2013, cankered branches were collected and sent to Gerry Adams at the University of Nebraska for fungal isolation and genetic sequencing. Several potential canker pathogens were identified from these samples. Inoculation trials were conducted with these fungi in spring 2013 and 2014 to determine if any cause hemlock canker disease of western hemlock in Alaska. Of trees inoculated in 2013 and 2014, Discocainia treleasei, Pezicula livida, and Collophora hispanica were the fungi that generally caused the largest lesions to develop at inoculation sites on tree boles. Discocainia treleasei was also used to inoculate freshly-cut hemlock logs in Juneau in 2015, resulting in consistently better lesion development than the control treatment. In 2016, new methods were used to preserve and genetically sequence fresh samples obtained in Sitka and Juneau. Material was cultured directly in the field and also preserved on Whatman FTA cards, designed to preserve genetic material and reduce contamination. Illumina sequencing, a very sensitive genetic sequencing approach, is being used to identify all fungal organisms present in the FTA card-preserved samples. This work is continuing, and potential causal pathogens identified through these advanced methods will be used in seedling inoculation trials in 2018.

Our knowledge of hemlock canker primarily comes from informal field detection followed by roadside surveys to assess disease extent and impacts (e.g., miles of roadside forest affected, distance symptoms extend from roads, sizes of trees killed, age structure of forest affected). When present along shorelines, this disease can be seen from the air; however, mapped extent is considered a significant underestimate because small tree mortality and lower crown symptoms are seldom visible from above.