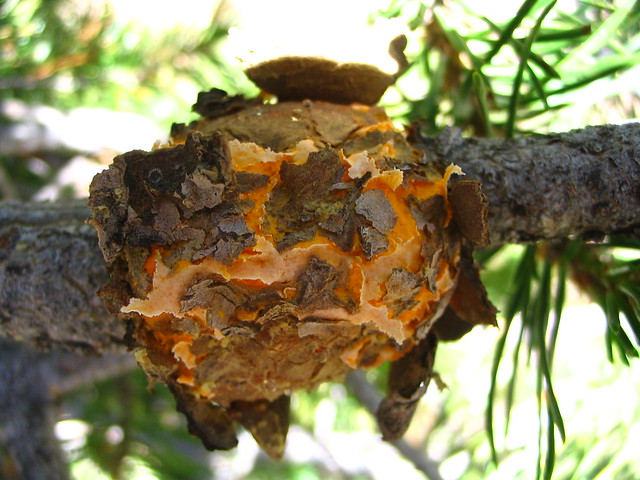 Western gall rust is prevalent throughout the range of shore pine in Southeast Alaska and its incidence does not change much from year to year (Map). In 2021, we observed an increase in galls that were infected by the fungus Nectria cinnabarina, which leads to bole and branch mortality. As an obligate parasite, it is uncommon for western gall rust to kill branches and boles directly; however, when secondary insects and fungi invade galls they girdle stem tissue, causing greater impacts to shore pine health. In 2021, aerial surveyors recorded 73 acres of new dieback (flagging red branches) associated with western gall rust. In permanent plots established to evaluate shore pine health in Alaska, infection was found to be ubiquitous and frequently contributed to top kill or tree mortality. In 2017, western gall rust was observed sporulating at the edge of a large, diamond-shaped canker on a shore pine tree bole in Gustavus, suggesting that it likely causes this common type of bole canker (i.e., hip canker). Another stem rust, stalactiform blister rust caused by Cronartium coleosporioides, was recently detected on shore pine near Haines (molecularly confirmed) and Gustavus (suspected). An additional suspected stalactiform blister rust observation was recorded in iNaturalist near Hoonah. Cronartium coleosporioides completes part of its lifecycle on pines and another part on plants in the family Scrophulariaceae/Orobanchaceae, especially paintbrush in the genus Castilleja.

The incidence of western gall rust changes little over time, though conditions in some years may be particularly favorable to infection. In British Columbia and other parts of the Pacific Northwest, gall rust infection has been documented to occur sporadically in years (‘wave years’) with weather conditions conducive to infection (cool and wet during spring sporulation). The wave year phenomenon has not been evaluated in Alaska, but it is thought that ideal infection conditions occur more regularly in the coastal rainforest of Southeast Alaska compared to other regions.

Western gall rust infection causes spherical galls to develop on branches and main boles of 2- and 3-needled pines. Unlike many other rust fungi (e.g., spruce broom rust and spruce needle rust), western gall rust spreads from pine to pine and does not require an alternate host to complete its lifecycle. This disease is most damaging when it infects young pines on or near the main tree bole. In addition to contributing to topkill, main stem infections can also be infection courts for decay fungi and are common points of stem breakage.

In spring, conspicuous orange spores are released from galls to infect pines through newly-emerged foliage. The fungus moves from the vascular tissue in the leaf to the branch, where it causes swelling and develops spores for reproduction. Western gall rust does not usually kill branches directly, but infections facilitate secondary insects (e.g., Pityophthorus twig beetles and the Douglas-fir pitch moth) and fungi (e.g., Nectria) that can invade and girdle branches or boles.

Permanent plots (46) were established at five locales in Southeast Alaska in 2012 and 2013. In plots, 85% of live pines were infected with western gall rust, 34% had at least one gall on the main stem (bole galls) that could lead to top kill or whole tree mortality, and 25% had dead tops associated with bole galls.

Shore pine is not commercially managed for timber in Alaska; therefore, this disease is not actively managed. Homeowners wishing to treat landscape trees can prune affected branches to remove inoculum and prevent spread.

Western gall rust severity and distribution information comes from a plot network established in 2012 and 2013 to evaluate the health status of shore pine in Southeast Alaska. These plots were established with competitive funds from the U.S. Forest Service Forest Health Monitoring Program. Analysis of Forest Inventory and Analysis data has emphasized the need to gain more information about damage agents and mortality rates of shore pine.

Georeferenced observations of western gall rust (Cronartium harknessii) in Southeast Alaska as of 2021
with the modeled distribution of its host, shore pine (Pinus contorta subsp. contorta). The modeled distribution
of shore pine was developed by the Forest Health Technology Enterprise Team in 2011 (240m-resolution, presence based on dominant tree species by tree diameter).