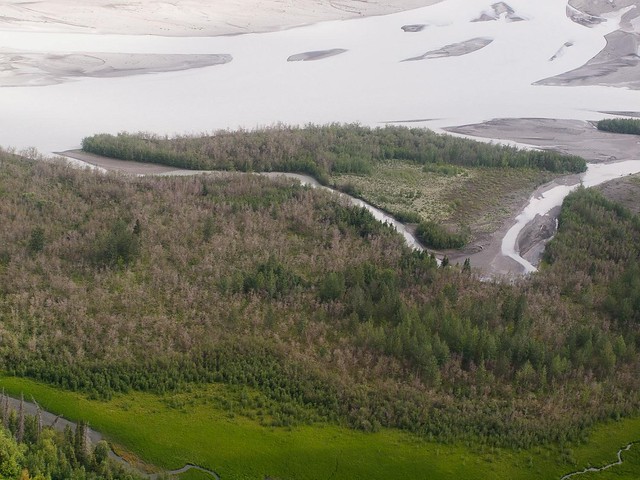 During ground surveys in Southcentral and the Interior, minor alder canker was recorded in 2021 at four locations near Anchorage and Delta Junction. From the air, almost 140 acres of alder dieback were observed in Southcentral between Denali State Park and the Caribou Hills on the Kenai Peninsula. Diagnostic fungal structures cannot be seen from the air, but dieback symptoms on thin-leaf alder are usually caused by Valsa melanodiscus and can culminate in mortality. Other canker causing fungi, including a species of Valsalnicola, are more prevalent on Sitka and Siberian alder. Significant alder dieback began in 2003 and peaked between 2011 and 2014; since then, alder canker damage has been decreasing. We have mapped it on all alder shrub species throughout most of the state. Alder dieback has frequently been aerially mapped throughout Southeast, however canker diagnosis on the ground has mainly been along the Stikine River.

When alder canker roadside surveys were repeated in 2016 after the inaugural survey in 2006, alder canker was detected at twice as many monitoring sites and showed a marked increase in canker incidence on Sitka and Siberian alder. Alder canker has also been confirmed on Sitka alder in Southeast Alaska, but damage there has not been severe. The increase in disease incidence detected through the 2016 survey is consistent with peaks in aerially mapped damage in 2011 and 2014 since the initial survey was implemented. See the detection maps for alder canker observations from the air and ground over the past decade.

On thin-leaf alder, dieback is usually due to girdling cankers (localized dead and dying areas) caused by the fungus Valsa (Cytospora) melanodiscus. Cankers can grow rapidly and as the pathogen kills the phloem, cambium, and outer xylem it partially or completely girdles branches and/or main stems. Sprouting is common below dead tissue. Although V. melanodiscus is the most common and virulent pathogen causing cankers on thin-leaf alder, there are a number of other fungi that cause very similar cankers. Cankers also cause dieback upon Sitka alder and Siberian alder. However, V. melanodiscus is not the main culprit on these two species. Instead, we have found fungal species new to science, known species with expanded ecological roles, and a rather large and diverse community of visually similar canker pathogens on alder. The fungi that cause alder canker are presumably native and usually relatively benign fungi for which conditions have changed to their advantage. Red-brown foliar symptoms of alder defoliation (caused by insects) and dieback (caused by canker fungi) appear similar from the air but can be distinguished. Valsa melanodiscus was identified as the main causal fungus; however, several other canker fungi also contribute to thin-leaf alder dieback. Dieback has been increasing on Sitka alder in Southcentral and Siberian alder in the Interior since about 2014. Alder canker has also been confirmed on Sitka alder in Southeast Alaska (near Haines and along the Stikine and Taku Rivers), but damage there has not been severe.

Why have these presumably native pathogens caused unprecedented damage in the past decade? Evidence suggests that water stress due to climate warming is linked to increased canker incidence and severity (Ruess et al. 2009, Worrall et al. 2010, Rohrs-Richey et al. 2011). In addition, canker mortality is greater on thin-leaf alder stressed by defoliation from the invasive insect, green alder sawfly (Monsoma pulveratum), first found in Alaska in 2004. Over the next decade or two the expected increasing temperature trends are conducive to making an already severe epidemic even more damaging. Continued alder mortality poses a considerable threat to areas that are dependent on alder for its nitrogen-fixing contribution to soil nutrition. In densely populated, early successional floodplains, high disease severity will quickly reduce total ecosystem nitrogen inputs. Changes in successional processes and ecosystem function are expected over the long-term (Nossov et al. 2011). Permanent removal or reduction of thin-leaf alder from riparian ecosystems on a landscape scale would profoundly affect long-term nutrient cycling and forest productivity, aesthetic value, and allochthonous inputs to rivers and streams.

Dieback symptoms on thin-leaf alder have been reported since the late 1980s in northeastern Oregon and the southern Rocky Mountains (Worrall 2009). In New Mexico, Colorado, & Wyoming, 37% of standing stems were reported dead and another 29% were alive but diseased. Evidence from Colorado suggests that warm summer temperatures are conducive to disease and increasing temperature trends may make an already severe epidemic even more damaging (Worrall et al. 2010). In Alaska, severe mortality of thin-leaf alder was documented in the Southcentral region in 2003. Surveys have since found that the disease is present to some degree in virtually every thin-leaf alder stand and is positively correlated with stem density. One study has documented disease on 54% to 76% of thin-leaf alder stems on sites from the Kenai Peninsula to Fairbanks (Ruess et al. 2009).

Alaska’s aerial detection survey has mapped branch dieback and whole stem mortality on over 380,000 cumulative acres since 2010 (Map 1). The damage is not only conspicuous near population centers and roads throughout Southcentral and interior Alaska, but is also evident in remote areas throughout much of the state. While most of the affected acreage has been mapped near river floodplains with thin-leaf alder shrubs, many acres were found on Sitka and Siberian alder shrub species up to 2 miles from riparian areas and up to 1,500 ft. elevation. The incidence of dieback on Sitka alder throughout Southcentral Alaska, especially on the Kenai Peninsula, has increased in the past four years. Alder dieback is predominantly caused by girdling cankers of the fungus Valsa melanodiscus, however several additional canker pathogens are also involved. Significant alder dieback began in 2003 and peaked between 2011 and 2014; since then, alder canker damage has been decreasing. In 2014, 125,000 acres of alder dieback were mapped.

Alder canker has also been confirmed on Sitka alder in Southeast Alaska (near Haines and along the Stikine and Taku Rivers), but damage has not been severe. Scattered branch dieback of Sitka alder was common near Juneau in 2018 but was not severe or visible from the air. Fruiting structures were uncommon, precluding identification of the causal pathogen. This disease activity was likely linked to drought conditions, which can increase alder’s susceptibility to normally-weak pathogens. Red alder trees are also affected by canker fungi in Southeast Alaska. In 2015, warm, dry spring weather predisposed red alder in central and southern Southeast Alaska to unprecedented damage from a canker fungus (Melanconis sp.).

Observations are periodically made during the aerial detection survey and field inspections. Targeted monitoring efforts were initiated in 2006 and repeated in 2016. We resurveyed the road system using sites and methodologies of a 2006 survey, with minor modifications; we excluded sites in the urban environment, on private property, and in locations where conditions had drastically changed. Ground plots were measured in 2016 every 10 miles on over 3000 miles of the major road system. We found canker on over half of the 192 resurveyed sites (see Map 2). Canker was found on 80% of sites with alder in 2016, compared to 41% in 2006. Due to difficulty distinguishing Sitka alder (Alnus viridis subsp. sinuata) from Siberian alder (A. viridis subsp. fruticosa), these two subspecies were combined for data analysis. Canker incidence on A. viridis increased nearly 3-fold; only about 25% of the sites with this host are now canker-free compared to 72% in 2006. A less dramatic disease increase was seen among sites with thin-leaf alder (A. incana subsp. tenuifolia); only 16% of sites were disease-free in 2016 compared to 29% in 2006. This detected increase in disease incidence is consistent with peaks in aerially mapped damage in 2011 and 2014 since the initial survey was implemented.

Map 1. All georeferenced alder canker detections from ground and aerial surveys as of 2021.

Map 2. Alder canker dieback on three alder shrub species mapped by the aerial detection survey (ADS) and ground-based plot surveys. The aerial detection survey measured approximately 380,000 cumulative acres of alder canker between the years 2010 and 2016. Ground plots were measured in 2016 every 10 miles on over 3000 miles of the major road system.