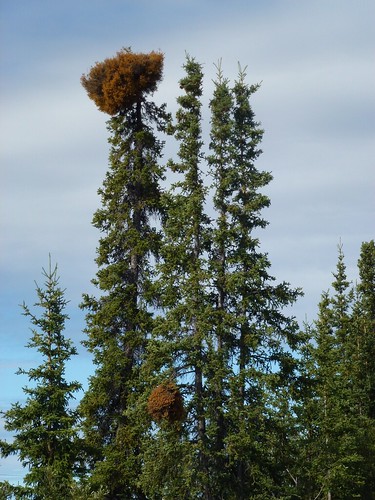 Spruce broom rust is one of the most easily identifiable diseases in Alaska, therefore we have a remarkably comprehensive map of both ground and aerial observations (see Detection Map). During 2021 ground surveys in Interior and Southcentral, we documented spruce broom rust on both white and Sitka spruce at ten locations between Delta Junction and Homer. In addition, 12 research grade observations were recorded through iNaturalist. From the air, about 120 acres were mapped, mostly north of the Alaska Range between the Kanuti, Yukon Flats, and Tetlin National Wildlife Refuges, and towards Denali National Park and Preserve. The brooms are perennial, with relatively steady incidence from year to year. In 2018, an observation was made on the Seward Peninsula, over 100 miles west of previous detections and west of the proposed range of kinnikinnick (Arctostaphylos uva-ursi), the alternate host plant (based on Hulten, 1968, Flora of Alaska). This part of the state has not since been flown to confirm the record. Broom rust is common and widespread on white and black spruce branches and stems throughout Southcentral and the Interior. It is absent from most of Southeast aside from Glacier Bay, northern Lynn Canal, and Halleck Harbor on Kuiu Island.

The incidence of the perennial brooms changes little over time, although conditions for infection may be particularly favorable in some years.

Spruce broom rust is one of the most conspicuous diseases of white, black, and Sitka spruce trees in Alaska. Infected trees have dense clusters of branches with a yellow or orange appearance on the branches or the main tree bole. These branch clusters are sometimes referred to as witches'-brooms or brooms.

During spring and summer the brooms have a yellow or orange appearance because of the short, yellowish needles they contain. In midsummer, yellow or orange spores erupt from pustules on the needles. A distinct sweet but earthy odor is often noted from sporulating brooms. Needles are shed in the fall, giving the broom a bare, dead appearance, but the twigs in brooms do not normally die. The following spring, brooms produce new, yellowish needles.

Many rust fungi must infect two different types of plants. Spruce broom rust infects kinnikinnick, sometimes called bearberry (Arctostaphylos uva-ursi (L.) Spreng). This low-growing, trailing plant has flexible stems, round and leathery perennial leaves, and red berries. Although spruce broom rust requires the alternate host kinnikinnick/bearberry to complete its lifecycle, infected spruce are sometimes observed where the alternate host is locally uncommon in the understory. Overall, the rust on spruce closely follows the distribution of kinnikinnick/bearberry, which is absent from most portions of Southeast Alaska, but can be found in many areas of South-central and Interior Alaska. Close relatives of kinnikinnik e.g., A. alpina (L.) Spreng and A. rubra (Rehd. & Wilson) Fern. may also be susceptible to the fungus. These host plants may extend the range of the disease to spruce growing in northern and northwestern Alaska.

Many infected spruce trees suffer no apparent consequences. Other trees, however, may suffer some damage including reduced growth, top-kill, and infection by wood decay-causing fungi, or tree death.

Ecologically, the brooms appear to serve as important, perhaps critical, winter habitat for birds and mammals. Studies on flying squirrels in Interior Alaska indicate that squirrels create a cavity or hollow within the brooms and utilize the site for dens.

Brooms offer refuge for many birds and small mammals, perhaps a desirable feature for some homeowners or woodlot owners. For managers or homeowners hoping to reduce disease, removal of the alternate host (all kinnikinnick within 1,000 feet of spruce), pruning of affected branches, or removal or affected trees during thinning operations are all strategies to reduce the incidence and severity of spruce broom rust. Unfortunately, many brooms occur on the main bole, where they cannot be easily removed by pruning; for effective control of bole brooms, the top of the tree (including the broom) would have to be removed.

Spruce broom rust can be mapped by aerial survey when brooms occur in the upper crown but is often more easily observed from the ground.

The distribution of Chrysomyxa arctostaphyli in Alaska as of 2021 based on plot data, informal observations, and aerial survey with the distribution of spruce (Picea spp.) hosts in Alaska. Modeled host tree layers were developed by the Forest Health Assesssment and Applied Sciences Team (formerly FHTET) in 2011 (240m-resolution, presence based on dominant tree species by tree diameter).