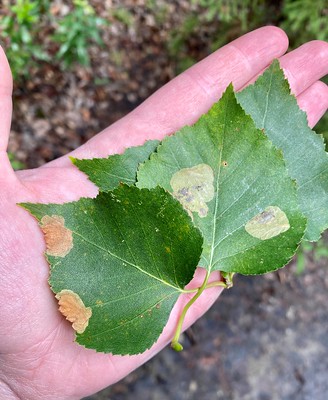 Habitat(s): Birch leaves (development) and in the duff/leaf litter (overwintering)

Almost 48,000 acres of birch leafminer damage were mapped in Southcentral and the Interior during aerial detection surveys. Birch leafminers have been in outbreak for several years in the Anchorage and Wasilla areas as well as in and around Fairbanks and North Pole. This damage is easily observed on the ground at all severity levels but is usually not severe enough to map during ADS until early- to mid-August. In 2018 and 2019, late season flights were flown to capture leafminer damage caused by Profenusa thomsoni and Heterarthrus nemoratus. It was decided that mid-August flights would continue, and the temporal change has resulted in a substantial increase in birch leafminer acres mapped, even though ground surveys showed there was not a substantial increase in birch leafminer activity. During the late-season aerial detection surveys, over 100,000 acres were mapped in 2018, over 280,000 in 2019, and over 47,000 in 2021. Fewer acres were mapped in 2021 is likely due to a decrease in birch leafminer activity in Southcentral and overall decrease in area flown from recent years.

Over 20,000 acres were recorded in Southcentral with most of those acres mapped between Talkeetna and Little Coal Creek. Although H. nemoratus seems to be spreading in the Fairbanks area, it is still likely that damage in Interior is predominately from P. thomsoni, whereas H. nemoratus had been predominate in Southcentral in recent years. In the Interior, over 27,000 acres of birch leafminer damage was recorded during aerial detection surveys. Almost 25,000 of those acres occurred in the region around Fairbanks and along portions of Chena Hot Springs Road, the Steese Highway, and areas in between. A substantial amount of damage also occurred along the north side of the Tanana River from Birch Lake west to Nenana. Much of Fairbanks proper was difficult to survey due to increased aviation traffic, and as a result, areas in Fairbanks and around Fairbanks International Airport may have been under surveyed.

In 2021, what appeared to be H. nemoratus was also observed in Southwest Alaska at two separate locations in Bethel. One site was at the Yukon Delta National Wildlife Refuge main office where three small pole-sized birch had low-level infestations and at least one Sitka alder had trace levels of infestation. The second site was in a neighborhood approximately one mile away from the refuge main office where one pole-sized birch along a driveway had low levels of infestation. The very few birch trees nearby were not inspected. Although only low levels of infestation were observed, it may still indicate that leafminers have been in the area for several years, though the exact number of years is difficult to establish. This detection is important because many remote but developed areas off the road system, such as Bethel, are rarely surveyed. The closest leafminer population to Bethel is at least 350 air miles away with no road system connecting it to Bethel. However, substantial amounts of cargo, boat traffic, and aviation traffic do move through Bethel on a year-round basis and the final destination of passengers or cargo may be Bethel or any number of villages in the region. It is difficult to determine how leafminers arrived in Bethel, but it is possible that leaves from heavily infestated areas could have been transported there inadvertently with cargo or people.

In late May and early June, leaf mines on birch were observed earlier in the season than expected. Upon further investigation, mines were also found on alder. Larvae were extracted from the leaves and sent to LifeScanner for DNA-based identification. The leafminer was identified as the genus Eriocrania (Lepidoptera: Eriocraniidae) based on DNA analysis and comparisons in the Barcode of Life Data Systems and in consultation with a leafminer specialist. Notably, these specimens may represent an undescribed species.

Birch leafminers were observed during all ground-based survey efforts in 2020; however, it was undetectable during scan and sketch surveys in areas where it is known to occur.

Profenusa thomsoni and Heterarthrus nemoratus are the most commonly observed leafminers in birch in Southcentral and Interior. In Southcentral, leafminer damage was noted as low overall for both species during ground surveys. In the Interior, P. thomsoni damage was variable, ranging from trace to high levels of damage, while H. nemoratus damage was observed at trace to low levels. During ground surveys, approximately 2,800 acres of leafminer damage was mapped along the Richardson Highway south of Fairbanks and along the Parks Highway from around Talkeetna south to about Houston.

Invasive birch leafmining sawflies are believed to have entered eastern North America in the early 20th century, dispersed across Canada, and entered Alaska in the early 1990s. Birch leaf miner damage, specifically amber-marked birch leafminer (P. thomsoni), was first reported in Haines in 1991, but was not properly identified until it was detected in Anchorage in 1996. Following its introduction to Anchorage, sawfly populations increased dramatically, growing to outbreak levels throughout the Anchorage Bowl, and to a lesser degree the Mat-Su Valley and Kenai Peninsula. Damage caused by the amber-marked birch leafminer peaked in 2006 followed by a steady reduction in activity. During this period, the initially dominant amber-marked birch leafminer was displaced by late birch leaf edge miner, which reached peak severities affecting roughly 50% of leaves on infested birch in 2012.

In response to rising leaf miner populations and their corresponding damage to birch leaves, biological control efforts were implemented from 2004 to 2008. During this period, more than 3,000 Lathrolestes thomsoni Konow (Hymenoptera: Ichneumonidae), a parasitoid linked to the collapse of leaf mining populations in Canada and the eastern U.S., were released in multiple locations, primarily in the Anchorage area. Following parasitoid release, percent of birch leaves mined dropped by 30-40%, but a similar decline in leaf miner activity observed in non-release sites made the impacts of Lathrolestes difficult to determine. However, since its release Lathrolestes has successfully become established in Alaska and is spreading out from release sites parasitizing invasive leaf miners in new locations. Additionally, while monitoring for the released parasitoid, two naturally occurring parasitoids, L. soperi Reshchikov and Aptesis segnis Provancher (Hymenoptera: Ichneumonidae), were discovered attacking birch leaf miners. While the exact impacts of parasitoids preying on leaf miner populations is not yet known, it is hoped they will help reduce pest populations in the future.

In road surveys in 2017 and 2018, we found that both P. thompsoni and H. nemoratus have expanded their ranges in Interior Alaska. In Fairbanks, P. thomsoni is still heavily impacting birch trees, and in 2018 was found for the first time in Delta Junction and nearby Clearwater State Recreational Area. Locations with H. nemoratus present in Fairbanks more than doubled from 2017 to 2018 (5 to 11 sites). H. nemoratus was recorded at several locations along a 30-mile stretch of the Parks Hwy north of Healy, and was found for the first time at the Delta Junction visitor center.

Biology: Invasive birch leaf miners in Alaska are Palearctic sawflies (Hymenoptera: Tenthredinidae) a primitive species of stingless wasp.  Amber-marked birch leaf miner overwinter in soil cocoons, pupate in summer, and emerge in late June early July. All adults are females and reproduce via parthenogenesis (i.e. no males, viable eggs are oviposited without the need for fertilization). Eggs are oviposited in slits cut into the midsection of birch leaves, and hatch within 12 days. Larvae feed between a leaf’s epidermal layers, “mining” the leaf, and develop through six stages (instars) over a period of 24 days. Only the first five instars are feeding; when the larval stages nears completion, larvae emerge from leaves, drop to the soil, and construct cocoons for overwintering.

Symptoms: Amber-marked birch leafminer larval feeding becomes obvious in late July early August after a substantial portion of the leaf has been mined.  Browning foliage can be mistaken for early senescence (i.e. transition to fall colors), but close examination of the leaf will prove otherwise: 1) Mined leaves will appear a sickly yellowish-brown compared to the vibrant gold naturally exhibited by birch in autumn, 2) leaf epidermal layers will have become detached due to larval feeding, and the leaf will take on the appearance of a flattened or collapsed blister filled with frass (insect feces), and 3) if the leaf is examined prior to larval emergence, the flattened yellowish larvae (6 mm in length) can be observed within affected leaves.

Both amber-marked birch leafminer and late birch leaf edge miner can be found in the same tree or even in the same leaf, but the mines caused by these species are distinguishable. Late birch leaf edgeminer mines are a reddish ring on the edge of a leaf, expanding inward, and contain little frass. In contrast, amber-marked birch leafminer mines begin in the center of the leaf, often near a major lateral vein, and expands outward, and contain notable dark frass. Regardless of the species, impacts to birch trees from the two species appear to be similar.

Impacts: Negative impacts from invasive birch leafmining sawflies in Alaska are primarily aesthetic. During outbreaks >90% of a tree’s leaves can be infested by sawflies. Mining disrupts a tree’s ability to conduct photosynthesis, but the majority of damage occurs later in the summer after most tree growth has occurred. Alaska’s long summer daylight hours in May, June, and July may provide enough photosynthetic potential for trees to flourish despite a reduced capacity for photosynthetic at the end of the season. To date, we have not recorded birch mortality due to these insects. We will continue to monitor birch mining sawfly populations and their birch hosts in the years ahead to determine possible long-term impacts from these invasive pests.

The wasp Lathrolestes thomsoni (Hymenoptera: Ichneumonidae) (no common name) is a known parasitoid of birch leafminers in North America. Parasitoids lay their eggs in or on host organisms. Upon hatching, parasitoids consume and kill their hosts. Lathrolestes thomsoni inject eggs into sawfly larvae, sawfly larvae complete development, build overwintering cocoons, and pupate as normal, but it is the parasitoid not the sawfly that emerges from the cocoon the following spring. Reductions in amber-marked birch leafminer populations in Alberta, Canada and the eastern U.S. have been associated with L. thomsoni, and this parasitoid has successfully become established in Alaska. The effects of parasitoids on birch leaf-mining sawfly populations in Alaska has yet to be determined.

The cause of the apparent collapse of amber-marked birch leafminer populations in many locations in Southcentral Alaska requires further investigation. Was it due to a detrimentally high density of eggs per leaf, the establishment of parasitoids, competition between two species, a combination or all of the above, or a factor not yet determined? Will a similar collapse in populations in the Interior and Southcentral be observed where population densities are still high? Continued monitoring of amber-marked birch leafminer and late birch leaf edge miner populations will help us to answer these questions.

Birch leafminer damage can be mapped during aerial surveys. Prior to 2018, invasive birch leaf-mining sawflies were thought to predominantly impact areas within major population centers and along roadways. Aerial surveys in Southcentral Alaska were conducted later in 2018, and damage was observed extending to remote forests.

Birch leafminer activity detected in aerial and ground surveys in 2019.

Goulet, H. 1992. Insects and arachnids of Canada part 20. The genera and subgenera of the sawflies of Canada and Alaska. Hymenoptera: Symphyta.