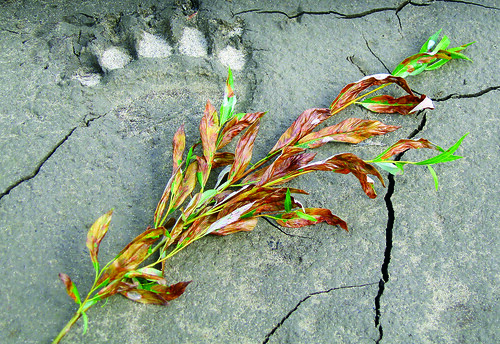 Habitat(s): larvae mine the inner tissue of willow leaves

Willow leafblotch miner was mapped on just over 14,000 acres in the Interior during aerial detection surveys. This continues a down-ward trend of the past few years with 31,000 acres mapped in 2019 and 35,000 acres in 2018. No acres of willow leafblotch miner were mapped during Scan and Sketch surveys in 2020 due to limited availability and poor resolution of available satellite imagery.

Nearly 11,000 acres of willow leafblotch miner damage were mapped in the Yukon Flats and adjacent areas, where the bulk of the damage has been historically mapped. Over 2,200 acres were mapped in and near Tok and the Tetlin National Wildlife Refuge. Several hundred acres were also mapped in the Tanana Flats, along the Tanana River near Nenana and in the Kanuti National Wildlife Refuge. Other smaller sites were also mapped across the landscape. Light to severe damage was common in all areas, while very severe damage was limited to a just few sites in the Yukon and Tanana Flats.

During ground surveys, several observations of willow leafblotch miner were made. Nearly all the records were spread across the Interior road system, with a few located in Southcentral on the Richardson Highway near Glennallen. Most sites had trace to moderate damage levels. Although willow leafblotch miner damage is not typically found in Southcentral, moderate to heavy damage was also recorded in 2020 at several locations in the Glenallen area and the Copper River valley.

Historically, ground observations demonstrate that willow leafblotch miner is present throughout the Interior and more widespread than is indicated during aerial surveys. In 2020, ground surveyors recorded over 400 acres of willow leafblotch miner activity along all Interior roads north of the Alaska Range where willow was present, though it proved to be difficult to locate during the scan and sketch survey. Willow leafblotch miner was also observed in some areas in the Copper River Valley. Damage appears as blotchy orange and brownish-grey foliage and was observed on shrub-size willow with stems up to 4” in diameter. At most sites, damage was recorded on multiple stems, with some sites showing over 30 stems affected. Levels of observed damage ranged from trace to moderate with a small number of sites featuring heavy damage.

It is unusual to have a willow leafblotch miner outbreak in Southcentral, but in 2020, moderate to heavy damage was found during ground surveys in the Copper River Valley along the Richardson Highway in the Glennallen area while moderate damage was recorded along the Edgerton Highway. During the 2019 aerial surveys, 100 acres of damage was mapped in the Copper River Valley, but none had been mapped in Southcentral for many years prior.

Apart from the Copper River Valley, damage levels observed on the ground in 2020 were similar to those seen on the ground in recent years, although it is hard to extrapolate how severe and widespread willow leafblotch miner was across the state this year.

Willow leafblotch miner eggs are pale green, satiny with finely veined surfaces, and adhered singly on bottom surfaces of willow leaves. Larvae undergo five developmental stages (instars), and are hypermetamorphic (early larval stages are distinct from later stages). First and second instars are small, have forward facing mouthparts, and lack legs and maxillae (mouthparts used for chewing). Later larval stages (instars 3-5) have downward facing mouthparts and legs and maxillae are present. Adults are small gray moths with mottled areas of light and dark gray to brownish gray on the forewings. Wingspans are 10-11 mm and antennae are approximately as long as wings.

Willow leafblotch miners are univoltine (one generation a year). In typical years, adult moths emerge and oviposit eggs in May. Larvae hatch in early June, and develop through the first four instars within four weeks. Fifth instar larvae may be present in June, but are observed primarily in July. Later instar larvae feed on mesophyll within leaves, producing characteristic blotches along upper leaf surfaces. Individual blotches are initially distinct, but coalesce as larval feeding continues. Later instar larvae are mobile, frequently exiting established mines, and initiating new mines within younger leaves. When larval stages are complete, larvae emerge from mines and pupate in silken cocoons often at distal ends of shoots. Estimates for survival from egg to pupae are less than 10%. Adults emerge in late July or early August, and overwinter in this stage.

Willow leafblotch miner is native to North America, but damage due to this insect was not reported by FHP staff in Alaska until the 1990s. From 1991-1993, over 300,000 acres were mapped, predominantly along the drainages of the Yukon and Kuskokwim Rivers. Another outbreak occurred in the late 90’s. Centered in the Yukon Flats National Wildlife Refuge, 300,000 acres of damage was recorded from 1998-1999. Since its initial discovery, willow leafblotch miner, has been consistently mapped each year at various intensities, with the highest single year damage (500,000 acres) recorded in 2010.

Control methods on a landscape scale are expensive and impractical. In urban areas where trees are grown in more isolated, artificial conditions homeowners may wish to select one of the following control methods: