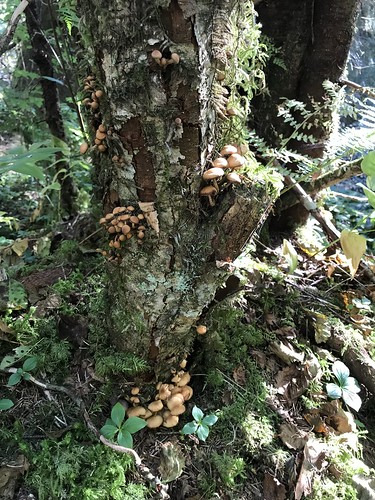 All tree species in Alaska

Armillaria root disease was recorded in Southeast on several red alder trees near Juneau in 2021. Members of the genus have been mapped on paper birch and white spruce in several locations in Interior and Southcentral Alaska and on nearly all the native tree species in Southeast Alaska (see detection map). In Southeast Alaska, Armillaria species are thought to hasten the death of stressed trees rather than directly cause mortality or to decompose wood after tree death. Distinguishing among species of Armillaria is generally not possible without specialized experience and equipment. Drs. John Hanna and Ned Klopfenstein (Rocky Mountain Research Station) led a west-wide project on the identity and distribution of Armillaria species, which detected A. sinapina and A. nabsnona in Southeast Alaska. More recently, they used climate envelope modeling to evaluate whether future climate scenarios favor our native Armillaria species, as well as assessing climate suitability for more aggressive Armillaria species presently found in the Pacific Northwest but not Alaska. Their findings suggest that relative climate suitability (i.e., land area with climate associated with a higher probability of disease presence) becomes greater for native species and non-native A. solidipes (the primary pathogen in the PNW) and A. cepistipes under future climate scenarios. They posit that based on these predictions, both species present potential invasive threats to Southeast Alaska under conditions of predicted climate change. These results were based on 32 A. sinapina isolates collected by our group from 12 locations in Southeast Alaska from 2016 to 2018. A single isolate of A. nabsnona was identified from a dying yellow-cedar crop tree on Prince of Wales Island, but this was insufficient for bioclimatic modeling. Collections from hardwood and conifer hosts from the Kenai Peninsula to the Arctic Circle in 2007 were all identified as A. sinapina.

In general, Armillaria species in Alaska are thought to be unaggressive wood decomposers or parasites of stressed trees, but more information is needed to understand its ecological role and impacts in Alaskan forests. In the 1950s, James Kimmey conducted a study in Southeast Alaska to measure the volume and incidence of stem decay and determined that Armillaria was an important heart rot of conifers, especially western hemlock. Kimmey used the appearance of decay to identify the causal fungus (for more information on this study, see our Conifer Stem Decays page). Identification of Armillaria to species requires advanced molecular tools. Since the 1990s, these tools have revealed significantly more Armillaria species diversity in North America and Europe than was previously known. Different Armillaria species vary greatly in their aggressiveness. Work is underway in Alaska and throughout the western USA in partnership with forest pathologists at the Rocky Mountain Research Station to assess Armillaria diversity.

Armillaria is most easily identified by signs of the fungus between the bark and the wood. These structures, which are visible throughout the year, include black shoestring-like rhizomorphs and white fan-shaped mycelium. In Alaska, these structures are frequently found on snags or trees dying from other primary causes, hastening wood decomposition. In conifers, there may be an abnormal resin flow from the root collar of infected trees. Harwoods may have longitudinal cracks that appear at the root collar and extend up the stem, a condition known as collar crack.

The mushrooms of Armillaria, sometimes called honey mushrooms, occur in clusters at the base of infected trees and stumps in late summer or autumn. Honey-colored mushrooms may extend up the bole of infected snags. Sometimes mushrooms have dark scales on the top. The white gills are attached to both the stalk and the cap, and a ring (annulus) may occur around the stem below the gills. There can be significant variation in mushroom appearance.

Armillaria root disease causes growth loss, butt and root rot, and mortality. Armillaria can quickly colonize root systems of recently dead or dying trees. In most environments in Alaska, the fungus rarely kills trees that are not under other stress. For example, Armillaria occurs on the roots and root collars of about one half of trees dying from yellow-cedar decline. It is not the primary cause of tree mortality, but probably speeds the process of tree death. Wood being decayed by Armillaria sometimes glows in the dark, a property called bioluminescense. Massive colonies of the fungus in North America (Michigan and eastern Oregon) have led Armillaria to be dubbed the Humongous Fungus (Oregon Public Broadcasting article and video from 2018 featuring USFS Forest Pathologists, available here), with colonies covering several square miles and estimated to be 2,000-8,000 years old.Georeferenced observations of Armillaria species in Alaska (as of 20120), with the modeled distribution of its hosts. Host distributions were developed by the Forest Health Technology Enterprise Team in 2011, 240m-resolution, based on dominant tree species by tree diameter

Georeferenced observations of Armillaria species in Alaska (as of 20120), with the modeled distribution of its hosts. Host distributions were developed by the Forest Health  Assessment and Applied Sciences Team (formerly FTET) in 2011, 240m-resolution, based on dominant tree species by tree diameter.