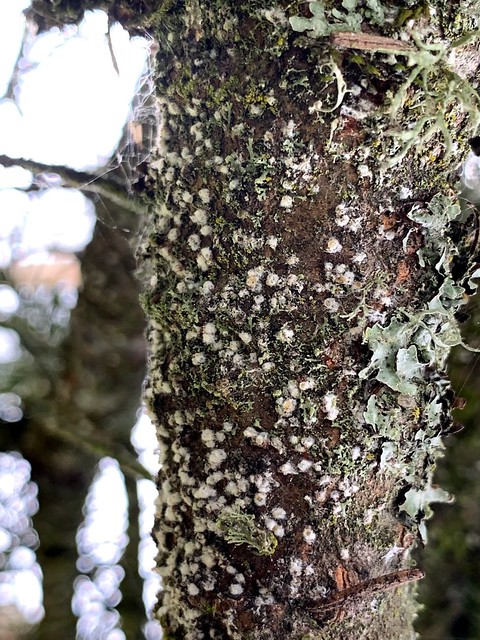 Balsam woolly adelgid was found infesting ornamental true fir in Juneau, AK in 2019, which was the first known detection in Alaska. The City and Borough of Juneau moved quickly to remove all 36 true fir on city property and destroy the infested material. Several infested trees remain on private properties in Juneau. The Alaska Division of Forestry is developing a cost-share program to assist Juneau home and business owners with removal of infested trees.

In 2020, the University of Fairbanks Cooperative Extension service and the Alaska Division of Forestry investigated a report of suspected woolly adelgids on several long-established lodgepole pines in the Big Lake area. Since lodgepole pine are not native to the region, these adelgids are of particular interest. During a site visit, specimens were collected from infested trees and sent to a specialist for DNA-based identification. The species was confirmed as Pineus coloradensis. The adelgids were most prevalent on numerous potted lodgepole pine seedlings described by the landowner as being the natural regeneration of several long-established larger lodgepole pines. It is unclear whether this adelgid species occurs naturally in the state or if it may have been introduced. Further investigation is needed.

Balsam woolly adelgids are native to Europe and have been introduced to several locations within the United States. This invasive species is a small sap-sucking insect that feeds on fir trees and can kill a tree within a few years. Adult adelgids produce a white waxy coating to protect them and their eggs from predators. Balsam woolly adelgid can be spread by the movement of plants in the nursery trade, firewood, or Christmas trees. Firs do not occur naturally in the Juneau area but are popular ornamental trees. Subalpine fir and Pacific silver fir are native to other parts of Southeast Alaska.

Please help contain this invasive species: if you have an ornamental fir tree and are in Juneae contact Elizabeth Graham to have it inspected for balsam woolly adelgids.

Balsam woolly adelgids were introduced to northeastern United States from Europe around 1900. They were found on the west coast in 1929 and the southeastern United States in the mid-1950s. Infested nursery stock is the presumed source of infestation. This invasive insect was first detected in Alaska in June 2019. At this time, it has only been detected in Juneau, AK.

Balsam woolly adelgid feeds on cells just beneath the bark of trees and can be found on twigs, branches, and trunks of trees. Feeding damages the tissue that transports food and water and can result in needle loss and reduced growth. Twigs may become enlarged, referred to as “gouting”, and shoots can become distorted and turn downward. Heavy or prolonged attacks often lead to tree death.

Distribution in the United States