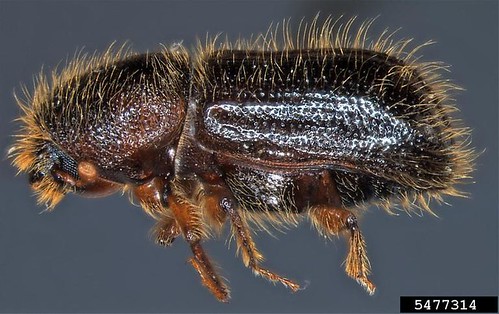 Western balsam bark beetle damage was observed on roughly 90 acres in 2021. The majority of the observed activity was concentrated in the Skagway River drainage near its junction with the White Pass Fork. Two additional small areas of activity were observed in the Taiya River drainage, on the western slope of Mt. Carmack and Mt. Clifford. Western balsam bark beetle attacks subalpine fir, which has a limited distribution in Alaska. As such, even small amounts of affected acreage are notable.

Adult western balsam bark beetles are range from tawny to dark reddish-brown in color and are approximately 3.4–4.3 mm in length. The elytra (forewings) are rounded posteriorly and without spines. Both male and female beetles have a distinct patch of ochre setae (hairs) on their frons, which is on anterior surface of their head capsules. This setal brush is quite dense and prominent on adult females, resembling a high top haircut. Larvae are yellowish-white in color with tan head capsules and are characteristically c-shaped; late-instar larvae can reach 3–4 mm in length.

Adult male beetles attack host trees and construct nuptial chambers beneath the bark in the middle of the summer. Female beetles alight to the chambers and mate with the males, after which the female beetles construct egg galleries that radiate from the nuptial chamber, forming a stellate (star-shaped) gallery pattern (fig. 2). Larvae feed away from the egg galleries, which can result in a confusing gallery pattern. Further, adult females can produce eggs during the initial attack in the summer and the following spring, resulting in a confusing progeny. Since the gallery pattern and progeny can be confusing, the species was given the fitting name Dryocoetes confusus.

Distribution of the hosts for western balsam bark beetle in Alaska, subalpine fir (Abies lasiocarpa) and Pacific silver fir (Abies amabilis).
Western balsam bark beetle damage has only been confirmed on subalpine fir in Alaska. Tree host distribution models were produced by
the Forest Health Assessment & Applied Sciences Team in 2011 based on stand density index (240m mapping resolution). Borders were
enhanced for visibility in this map.

For more information about this agent, contact Entomologist Dr. Sydney Brannoch at sydney.brannoch@usda.gov.