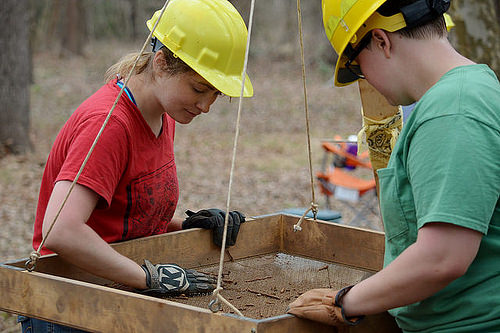 Passport in Time volunteers use a wooden shaker to assist with excavations. Photo credit: Holly Krake

Signed by President Lyndon Johnson fifty years ago, the National Historic Preservation Act marked a fundamental shift in how Americans and the federal government regarded the role of historic preservation in modern life.

The U.S. Forest Service has a long history of protecting significant heritage resources, to share their values with the American people, and contribute relevant information and perspectives to natural resource management. Protecting these resources ensures that future generations have an opportunity to discover the human story etched on the landscapes of our national forests, grasslands and prairie.

A project that exemplifies this is an archaeological dig at a rare 400 year-old American Indian homestead site in Georgia. With each gentle scrape of the trowel, the underside of a large broken pottery vessel emerged from the dirt in a river valley on the Chattahoochee National Forest. Artful coils and swirls are stamped on the fired clay and a few feet to the left, the remains of a clay wall and burned wood help paint the story of what might have happened at this family farmstead 400 years ago.

The extended family that occupied this site were likely forerunners of the tribe we know today as the Cherokee. Each pottery piece helps us determine how these people lived in the early 1600s and why they were here.

A clay hearth is measured and cataloged during excavations. Photo credit: Holly Krake

Why they were here is an important question. As diseases, for which the native population had no resistance to, and warfare tactics, introduced by Spanish explorers, tore apart the region in the 1540s, native people coped however they could.

By approximately 1550, Native American mound building across the southeast had all but ceased, and it would not be until approximately 1670 that English explorers arrived and documented the Cherokee in northern Georgia. Now in the third year of excavations, more details from this site — radio-carbon dated to 1600-1615 — are being revealed.

“This year, we are able to confirm a square house roughly 600 square feet in size with a well-developed center hearth,” said Dean Wood, principal investigator from the firm Southern Research. “But questions still remain. Were they farmers? Refugees from regional warfare? What brought them to this valley?”

Working in small groups, local volunteers with the Passport in Time program are helping answer these questions. This spring, they helped recover more than 1,000 pottery sherds using large wooden shakers to separate the dirt from the artifacts. Several test pits were also excavated looking for pottery, stone tools and additional outbuildings used by the family.