Nanebah Nez turned to a roomful of U.S. Department of the Interior employees and asked quietly for a moment to herself. When the group of curators left, Nez turned her attention to an 80-year-old piece of her ancestral past and quietly began her private prayer in Navajo, “Yáat’eeh Shinaali,” or “Hello, grandmother.” 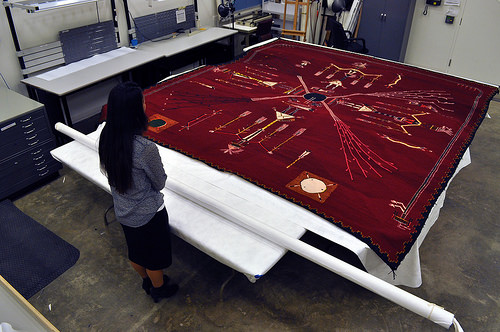 Bahe Shondee is a great-great-grandmother to Nez, an archeologist on the U.S. Forest Service’s Tonto National Forest north of Phoenix. Bahe Shondee, also known as Bull Snake Springs Woman, spent two years in the early 1930s preparing the yarn then weaving the 13-foot-by-12-foot rug “Sandpainting of the Arrow People.”

Unveiled, Nez’s family legacy splayed in front of her caught her breath. She grew up hearing the story behind the massive work but never had the opportunity to see it. Nez, wearing a pair of protective museum gloves, moved her hands slowly around the rug taking in the details, the variations of color in the hand-dyed wool and the tight weave that has stood the test of time. In a room rimmed with museum equipment and the chatter of onlookers, Nez’s present met her past.

“It’s humbling to see this in person and contemplate how much work and discipline my Naali put into this rug,” Nez said. “I know it took years so it feels like I’m looking at a piece of her life. I’m really grateful to be here.” 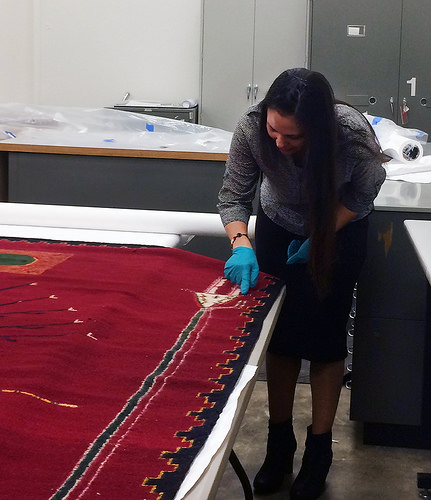 The rug depicts a sandpainting used in the Navajo Shooting Way Ceremony, an ancient ceremony involving the creation of a painstakingly intricate hand drawn sandpainting, during a series of songs and prayers. Sandpaintings, created on the dirt floors of hogans, Navajo traditional homes, are destroyed upon completion of the ritual. At one time they were never seen outside of their traditional use. To this day, the rendering of ceremonial symbols in a permanent medium is culturally taboo.

Interior Museum curator Tracy Baetz said Nez’s family has been instrumental in providing information about Bahe Shondee when the rug has been exhibited over the years. They will continue to work together, including helping to identify some of the people in photographs taken at the time.

It is believed that the rug came to the Interior Department because of Anna Wilmarth Thompson Ickes’ interest in American Indian culture, art, archeology and welfare. She would spend each summer in the west pursuing her interests. Ickes watched as Bahe Shondee worked and even took photographs of Bahe Shondee and the family.

Ickes later told her husband, who happened to be Secretary of the Interior Harold Ickes, about the rug. That set into motion Interior’s desire to know more about the piece. Anna Ickes died in an automobile accident in 1935. The Interior Department purchased the rug from the famed Hubbell Trading Post in 1937 for $1,000.

“For its sheer size, the rug is one of the largest pieces in the Interior Museum’s collection,” Baetz said. “We are particularly fortunate to know so much about this rug’s history and – through the family of Bahe Shondee – about its maker. It’s not often that we have such rich, documented details and personal recollections about a piece.” 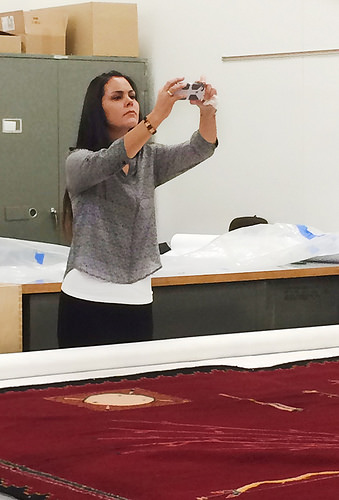 Today, the rug is carefully used and stored by the Interior Department and will continue to be an important part of the cultural and historical history of this country. A multi-year renovation of the department’s museum sent the rug into storage. However, Nez’s visit shined a new spotlight on the piece.

“It’s easy to think of museums and museum collections only as being static or sterile, numbered and cataloged and kept in preservation-sensitive conditions,” Baetz said. “But being able to share not only the rug but also that moment with Nanebah is what museums are really all about: tangible, vital connections to vibrant, meaningful stories. All of us involved with and on hand for Nanebah’s visit to the collections facility realized we had just been part of something very special.”

In her job as an archeologist, Nez often works with other employees and tribal representatives in identifying remains and artifacts. But the connection to her cultural and family past has her thinking more about her family’s future.

“We have many stories about Bahe Shondee. She was a strong woman,” Nez said. “I hope someday I can bring my children here to show them something their great-great-great-grandmother touched and show them how impressive she was.”