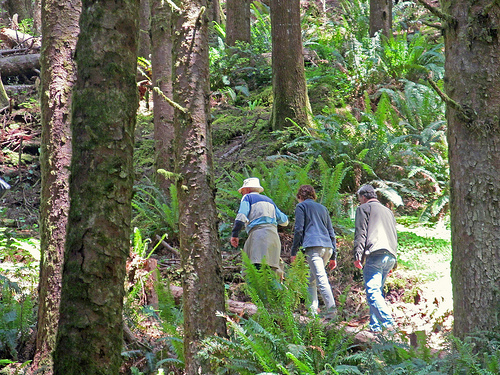 The Alsea were a tribe of Native Americans who, for thousands of years, lived along the central Oregon Coast. In 1901 anthropologist Livingston Farrand predicted their loss in “Notes on the Alsea Indians of Oregon.”

On June 1, the City of Yachats, a small coastal city in Oregon, joined with the U.S. Forest Service and Oregon State Parks to celebrate National Trails Day with a variety of activities, including the dedication of the new Ya’Xaik (pronounced yäh’ khīk) Trail. The trail is named for the only known village of the Alsea people who originally inhabited the area.

This trail is the result of many years of collaborative planning between the City of Yachats, the Siuslaw National Forest, area land owners and many citizen volunteers.

The newest leg of the trail, completed in April, enables hikers to complete just over a one mile loop from the historic 804 trail north along the ocean, through the Gerdemann Botanic Preserve and across Siuslaw National Forest land. The Yachats Trails Committee hopes to one day extend a link into downtown Yachats.

“Trails, and the environments they traverse, have both economic and symbolic importance,” Mayor Ron Brean said. “Trails connect communities, they bridge cultures and they can connect the past and the future.”

“The City of Yachats is especially grateful to the Siuslaw National Forest, Angell Job Corps Civilian Conservation Center and the many land owners and tireless volunteers who have assisted with creation of this outstanding resource that will benefit residents and visitors for years to come.”

“For years we have truly valued our partnership with the community of Yachats,” said Michele Jones, district ranger for the Central Coast District and Oregon Dunes National Recreation Area. “These energetic people have made many hiking opportunities come alive for those visitors exploring Cape Perpetua and Yachats.”

The overall theme for this year’s National Trails Day celebration was “interpretation” and, in addition to the dedication, the day provided a number of opportunities for visitors to learn more about the natural, historical and cultural stories of the area.

Visitors learned how Alsea Indians used spoons called Meixat made from elk antlers. They also commonly used clamshell cups and ate out of maple bowls made only by the men of the tribe.

To learn more about the Alsea people:

Annual Report of the Commissioner of Indian Affairs to the Secretary of the Interior for the Year 1872. http://public.csusm.edu/nadp/d159.htm

The Food of the Alsea Indians. http://www.orww.org/Reports/S/007J/0912/Kingfisher/Food_of_the_indians.htm