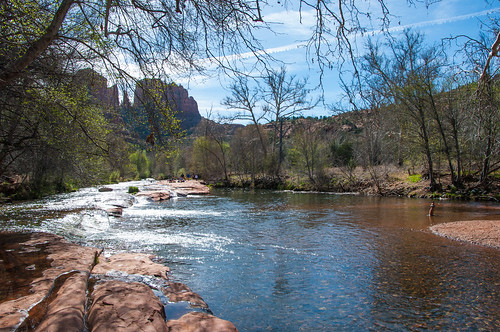 Earliest known inhabitants along lower Oak Creek date back to 700 - 900 AD when the ancient Southern Sinaguan people once occupied this land. Archaeological evidence suggests that Red Rock Crossing area was occupied seasonally for farming. In more recent history, the Verde Valley has been home to many Yavapai and Apache Native Americans, who traditionally hunted and gathered food in the area.

In 1880, Prescott cattleman John Lee settled along lower Oak Creek, naming his land the “OK Ranch” after his cattle brand. 16 years later, he patented the 160-acre ranch under the Homestead Act of 1862. Lee was one of the earliest white settlers in the Sedona area. He later sold the ranch to Elizabeth Ragsdale for cash value of $750.

Elizabeth resided on the ranch from 1896 to 1902, where she raised her cattle and served as a local midwife. Elizabeth married Charles "Bear" Howard, who hunted and was later hunted by a bear in Oak Creek Canyon. Bear was also known to have killed a man, and served time in San Quinton prison where he escaped prison twice in his lifetime. Elizabeth and Bear’s marriage only lasted a few months before going their separate ways. It was said she didn’t like his bear-hunting dogs and he didn’t like her cattle.

Over the next 15 years the Dumas and Schuerman families created a commercially successful orchard. By 1916, there were some 1,500 fruit trees. A cannery operation was established in the home and fresh fruit was taken to regional markets. Ollie Dumas used Crescent Moon as a winter range for his cattle. He eventually bought out the interests of his siblings, renting out the ranch and orchards. Over time, the ranch began to decline from neglect.

Andrew and Jane Baldwin purchased the property in 1936 for $6,000, and spared Crescent Moon Ranch from further neglect. They built the current home in 1938 and renamed the ranch the “Palo Bonito.” The ranch continued to produce fruit, vegetables, and grain. Produce was sold to miners in Jerome, and hauled as far away as Phoenix and Chicago to be sold.

In 1937, Claire Jones was hired by Mr. Baldwin to take over the Palo Bonito Ranch where he worked for the next 16 years. No electricity was available in the area, so a large water wheel was installed to pump domestic and irrigation water. In 1953, the Baldwin ranch was sold to Mrs. Nick Duncan.

In 1980, The Forest Service purchased the 160-acre Crescent Moon Ranch with National Land and Water Conservation Grant dollars. Intent of the Forest Service was to protect the land from future development and to secure it for the public’s enjoyment.

The old barn is the only building remaining from the original homestead. Today the ranch house and other historic buildings are registered as National Historic Sites.