The San Francisco Peaks are actually the remains of an extinct volcano. Millions of years ago this great mountain was shattered by an explosion similar to the one that devastated Washington's Mt. Saint Helens in 1980. Inside the now quiet caldera a lush alpine environment has blurred evidence of that cataclysmic event.

The trail leading into the heart of the ancient volcano begins in beautiful Lockett Meadow. From this island of emerald, ringed with aspens and high peaks, the trail winds through a shady forest to join the Waterline Trail briefly before following a service road into the mountain's now quiet Inner Basin, connecting to the Weatherford Trail on the far side of the basin. Here, extensive stands of aspens cover the steep slopes of the old caldera, coloring them solid gold in early fall. In spring and summer, wildflowers add a sprinkling of blue, red and yellow. From the basin's rims, avalanche tracks streak down the talus slopes, and remnants of old lava flows bear witness to the mountain's cataclysmic heritage.

Snow may remain here even into summer. Cross-country skiers continue to ski as late as June in some years. Hiking is the most popular way of visiting this beautiful and unique environment. Hikers begin coming to the basin before the snows have completely melted from the trail.

Animals you may spot in this high country include porcupine and elk. Black bears have been known to stroll right through groups of picnickers without so much as a glance at their lunches. The hermit thrush sings his best here. The climb to this high mountain place, where spring comes late and fall arrives early, is moderate but steady, but the reward is worth every bit of the effort.

Lockett Meadow Campground is at the Inner Basin Trailhead. 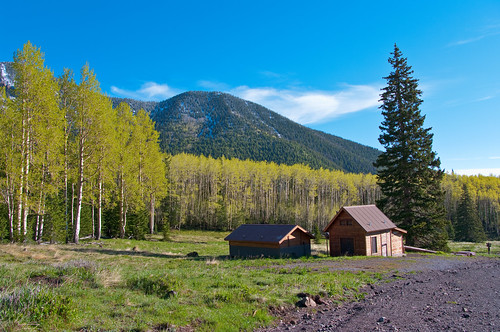 Photo tour from this trail [Flicker]

Directions: Drive northeast of Flagstaff on US Highway 89 for 12.5 miles. Turn left on Forest Road 552, directly across from the Sunset Crater National Monument turnoff. Follow FR 552 for approximately one mile. Turn right at the Lockett Meadow sign and continue to the campground. This dirt road is closed in early spring and late fall due to snow.

Click on the map thumbnail to open larger view in a new window.

Rating: Moderate to strenuous (steady gain of 600' in elevation per mile at high elevation)