This mile-long lava tube cave was formed roughly 700,000 years ago by molten rock that erupted from a volcanic vent in nearby Hart Prairie. The top, sides and bottom of the flow cooled and solidified first, after which the insides of the lava river continued to flow emptying out the present cave.

Ample evidence of how the tube was born is written in the rocks of which it is formed. Small wave-like undulations in the floor are the remains of ripples frozen in the last trickle of molten rock that flowed from the cave. Stone icicles hanging from the ceiling show where a final blast of volcanic heat caused the rock to partially re-liquefy and drip.

Dress appropriately when you come to visit, with warm clothes and sturdy shoes. The cave is as cool as 42° even in summer, and you may even find some ice inside. The rocks are always sharp and slippery, too. Bring two or three sources of light, in case one happens to fail, it can be very dark one mile from the nearest light source.

Portions of the cave which were once defaced by graffiti have been cleaned up. Today's more environmentally aware visitors take better care of such a unique resource and report vandals when they see them. Dogs and other pets are not allowed. It smells bad for days when they go to the bathroom in the cave, and the rocks can be harmful to their legs and paws. 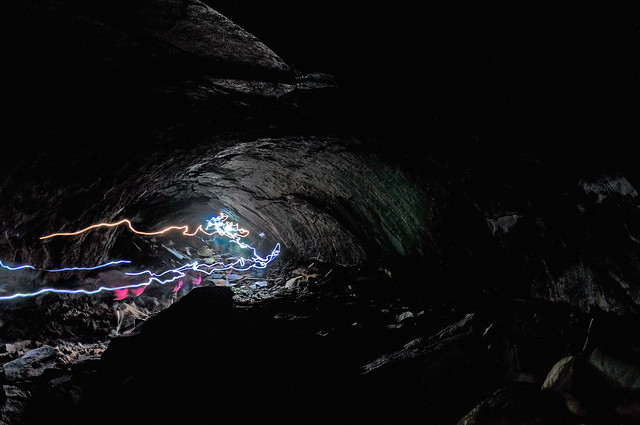 Location: About 14 miles north of Flagstaff on paved highways and graveled Forest Roads. Travel time is about 45 minutes.

NOTE: Though the Lava River Cave is open year-round, FR 245 and/or FR171 are typically closed due to muddy, snowy conditions. It is approximately a four-mile one-way trip to hike or ski to the cave from US 180.

Season: You can visit Lava River Cave the year-round, though you may need to ski to it in winter since Forest Roads 245 and/or 171 are closed during the winter months. Temperatures inside the cave remain roughly the same summer and winter (between 35° and 45° Fahrenheit).