Take a self-guided tour of our Lighthouses via the Hiawatha's OnCell App!

The Grand Island East Channel Lighthouse is on the southeast shore of Grand Island. Though Grand Island is a designated National Recreation Area (NRA) and is now much more accessible to the public, the lighthouse itself remains on private property.

You can see it from the decks of a Pictured Rocks or Alger underwater preserve cruise boat as it heads from Munising Harbor to the national lakeshore area, or from a private boat.

History of the East Channel Lighthouse:

In June 1864 and June 1866, Congress appropriated money to build one or two beacon lights at the discretion of the Secretary of the Treasury, at the entrance to Grand Island Bay and Harbor, Lake Superior.

A light or set of lights was needed to allow vessels to use Munising Harbor as a major harbor of refuge.

The Lighthouse Board spent the funds in 1868-70 building the East Channel Light and a pair of range lights on shore. The lighthouse, a wood framed keeper's house with an attached square wooden tower operated only until 1913 when it was replaced by the new range lights installed at Munising in 1908. George Prior was working as keeper at the East Channel Light at the turn of the century and was probably the last person to serve at the post.

Long abandoned, the lighthouse was in danger of crumbling to the ground until just a few years ago, when a group of private citizens, including the owner, decided to do something about it. They repaired its stone foundation and supported the tower and house with a series of cables. Now a much sturdier building rests on the sandy shoreline of the island.

Its deep brown foundation shows signs of the repairs, but its wood siding has not seen a trace of paint or other decoration. The wood has weathered to a dark gray and the square tower is capped with a dome of green copper roofing and exposed to the elements. 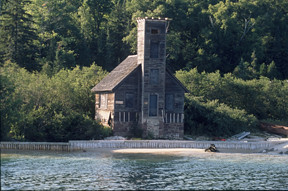 Located on private land, the lighthouse cannot be accessed by land.  However, many people view the light by taking one of several commercial boat or airplane tours or by private boat or kayak.