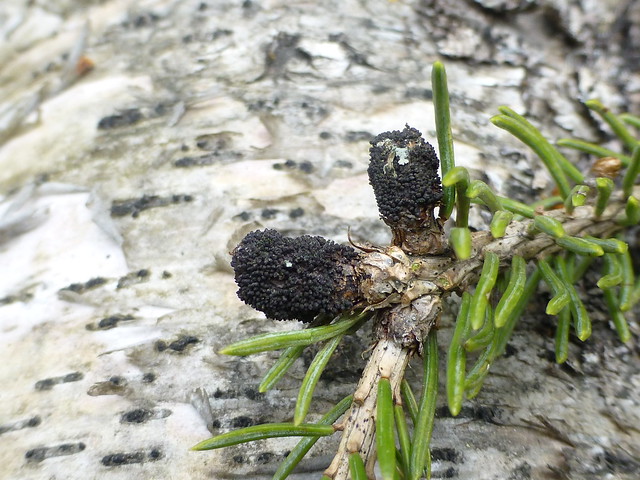 Spruce bud blight is found throughout the state, but damage has been minor and limited to the buds. Identical symptoms are caused by three fungal species but distinguishing among them requires specialized equipment, thus the specific cause of many observations is not identified. Sergio Peralta, a graduate student from University of Nebraska-Lincoln, with help from FHP, collected 133 samples from Interior and Southcentral ranging from the Chatanika River north of Fairbanks to Homer. By microscopic examination, he found that 90 (68%) of the samples were Gemmamyces piceae, which causes widespread mortality of plantation spruce in Central Europe. Eighty-eight of the G. piceae samples were on white spruce and two were on ornamental spruce species on the Kenai Peninsula. Sixteen of his samples were solely Dichomera gemmicola on white and Sitka spruce on the Kenai Peninsula and seven were Camarosporium species on white spruce south of the Alaska Range. Notably, he found one sample had both G. piceae and D. gemmicola on the same bud, while another had both G. piceae and Camarosporium. Sergio has sequenced the total genome of G. piceae and is using it to design a population genetic study to determine how long the fungus has been present in Alaska. FHP staff collected additional spruce bud blight samples in Southcentral and Interior Alaska: six were G. piceae and 41 were unidentified. In Southeast, D. gemmicola was found on Sitka spruce at two locations near Juneau, where G. piceae has never been detected.

Overall, there have been more than 350 observations of blighted spruce buds in Alaska on white, Sitka, and Lutz spruce (Sitka-white spruce hybrid) in the forest, and Colorado blue spruce in ornamental settings (Detection Map). There has been no observed mortality from the disease; most affected trees have trace infection (1-5%), although some trees have up to 100% of buds infected. We have confirmed Gemmamyces piceae at 31 sites from near Anchor Point to north of Fairbanks. Fairbanks appears to be a hotspot for this fungus but that may be an artifact of sampling effort. Gemmamyces piceae has not been found in Southeast Alaska. Dichomera gemmicola has the widest distribution. It has been found on white and Lutz spruce from near Lake Clark on the Alaska Peninsula, Talkeetna, and Chicken; it has not been found near Fairbanks. Dichomerra gemmicola is the most common bud blight on Sitka spruce in Southeast, but can be difficult to detect without dedicated surveys due to its very low damage severity and subtle symptoms. Camarosporium is more prevalent on white spruce in Southcentral up to the Alaska Range, with single points near Fairbanks and on a Sitka spruce in Southeast, respectively.

Blighted spruce buds (entirely or partially dead from a fungal infection) were first noted in Alaska on ornamental Colorado blue spruce near Homer in 2013. In 2014 it was found for the first time on native white spruce in the forest near Anchorage. Identification of Gemmamyces piceae by Forest Health Protection in Alaska became possible with a 2016 publication reporting a sudden spruce bud blight outbreak in Colorado blue spruce plantations in the Czech Republic (Cerny et al. 2016). The publication describes a massive outbreak that was first detected in 2009 and has now been found across the Czech Republic. Bud loss quickly reached 80-100% in highly infected trees and stands. The fungus has been reported since 1906 from Austria, Czech Republic, Denmark, Finland, Russia, Scotland, and Switzerland (Borthwick 1909). In these locations, it has primarily been found in human-altered situations (e.g., urban ornamentals, nurseries and forest plantations) on the North American tree hosts Colorado blue spruce and Engelmann spruce, but Sitka spruce and white spruce were also susceptible to a lesser degree. Neither the fungus, nor the disease it causes, were found within the native range of Norway spruce in Europe until 1946. It has been speculated that the fungus is native to Asian spruce from the Tianshan Mountains in China (Cerny et al. 2016). However, a recent paper made an apparently unsupported claim that it is widespread in North America (Jaklitsch & Voglmayr 2017). Only two prior North American records have been located, both from 1990 in New Brunswick and Nova Scotia on the east coast of Canada. Dichomera bud blight was first described in the early 1960s from British Columbia, where it has been more frequently reported on inland Douglas-fir, Engelmann spruce and white spruce than on coastal Sitka spruce (Funk and Sutton 1973). This disease usually is not a significant concern.

These diseases are recognized by black, swollen, misshapen buds and deranged growth patterns. The causal fungus infects through the bud and may kill buds prior to bud break. Infected shoots that are not killed characteristically grow around developing lesions, resulting in twisted, zigzagged branches and axillary bud proliferation. The symptomatic branch can be used to date the original infection (based on the affected branch cohort). After several years of bud loss, trees may wither and die.

FHP installed monitoring plots near Anchorage and Fairbanks in 2016 and found that damaged buds affected up to 40% of the trees within 50ft-radius plots. Most affected trees have very few damaged buds (less than 5%), but highly infected trees can have up to 100% of the buds dead or damaged.

In 2017, we installed monitoring plots (182 plots) and conducted informal surveys to gather presence/absence information and disease severity information statewide. Three different sampling designs (fixed-radius plots, timed meanders and transects) were employed depending upon location, access, and available resources. In conjunction with this intensive sampling effort, Dr. Gerard Adams (University of Nebraska Lincoln) determined that identical signs and symptoms were caused by three different fungal pathogens. Despite an effort to collect sexual fruiting structures of G. piceae in Alaska in 2017 and 2018 for a population genetics study, this fungal pathogen has proven extremely difficult to obtain in pure cultures. This work was intended to provide insight as to how long the fungus has been present in Alaska based on genetic diversity. Higher diversity would support a relatively longer time-since-establishment and likely native status. Its widespread occurrence, generally low levels of damage, and infections dating back a decade or more at many sites suggest it is native or long-established, while the lack of reports in Alaska prior to 2013 and limited detection in North America may point to a more recent introduction.

Detection locations of spruce bud blight, caused by three fungi, in Alaska based on plot data and informal geo-referenced observations as of 2021. Modeled spruce species distribution was developed by the Forest Health Assessment and Applied Sciences Team (formerly FHAAST) in 2011 (240m-resolution, presence based on dominant tree species by tree diameter).