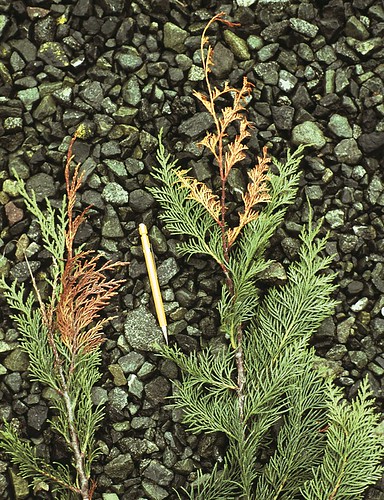 Few ground surveys were not conducted within the range of yellow-cedar in 2020 and 2021, so the relative incidence and severity of the disease is unknown. Other shoot diseases were more common in 2020 and 2021 due to wet conditions. Terminal and lateral shoots of yellow-cedar seedlings and saplings typically die from this disease in early spring. Long-term tree structure is not thought to be compromised by leader infections.

In 2018, we received samples of yellow-cedar cones infected with a fungal pathogen on Prince of Wales Island near Naukati. We sent fungal cultures and diseased cone tissue to Dr. Jane Stewart at Colorado State University for molecular diagnosis. The cultures were identified as Kabatina thujae, and further work with infected tissue will help to confirm this fungus as the causal agent. The truest confirmation will come from intentionally inoculating healthy yellow-cedar cone buds with the fungus to reproduce the disease. It is interesting that Kabatina thujae is the likely cause of this cone disease, since the fungus commonly causes shoot blight; the damage to cones has not been previously documented in Alaska.

We are beginning to build a database of georeferenced ground observations of this disease in Alaska. Fungal databases, such as the Global Biodiversity Information Facility, report that this pathogen has also been documented in France, Great Britain, the Netherlands, and New Zealand. This database excludes British Columbia and Alaska as locations with this disease.

Terminal and lateral shoots on seedlings and saplings become infected and die during late winter or early spring. Symptoms of this disease are sometimes confused with spring frost damage. Dieback may extend 4 to 10 inches from the tip of the shoot. Sometimes entire seedlings up to 2 feet tall are killed. The long-term tree structure of taller saplings is not thought to be compromised by leader infections.

In 2013, some infections were observed on deer-browsed shoots. Dr. Jeffery Stone at Oregon State University and University of Oregon confirmed the identity of the causal fungus as Kabatine thujae from collections made in 2013. This pathogen is known to damage natural and ornamental yellow-cedar saplings in British Columbia. More work is needed to determine if this is the only shoot blight pathogen that causes widespread damage to yellow-cedar young-growth in Southeast Alaska.

A Climate Adaptation Strategy for Conservation and Management of Yellow-cedar in Alaska (p.74)