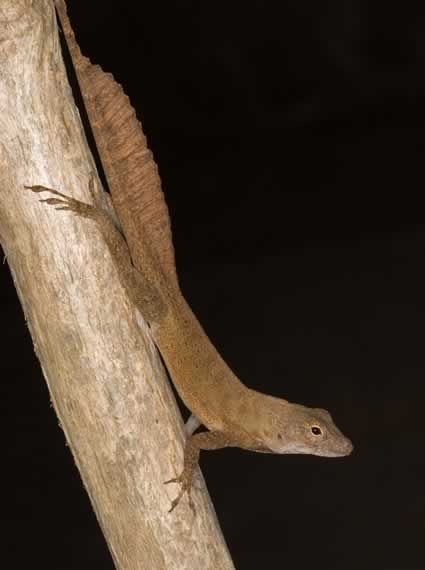 C. c. cristatellus coloration varies from brownish-red to dark black or an extremely light gray. Colors are seen to change in reaction to temperature and behavioral state. Although these animals are often mistakenly referred to as "chameleons," they are not a related species. C. c. cristatellus has a crest along its tail that may serve to demonstrate dominance in a contest between males for a female. Males have a bright yellow-orange dewlap, also used in determining dominance when attempting to control territory. Snout to vent length is typically between 5 to 8 inches (12.7 to 20.3 centimeters).

When seeking a mate or defending territory, a Puerto Rican Crested Anole male will display its dewlap and perform "pushups" to establish dominance. Males aggressively defend territories when mating, but only rarely does this result in physical combat. As a defense against predators, C. c. cristatellus may autotomize (shed part of its tail structure). The Crested Anole’s main diet consists of arachnids (spiders) and other small invertebrates, occasionally consuming fruit that has fallen from trees. They have also been observed consuming other anoles, possibly due to territory defense, or if other food sources are scarce.

The Puerto Rican Crested Anole can be found throughout the island of Puerto Rico including lower mountain regions. They can also be found on the eastern offshore islands. They have been introduced into southern Florida and eastern region of the Dominican Republic on the island of Hispaniola.

Where to look for this animal in the EYNF 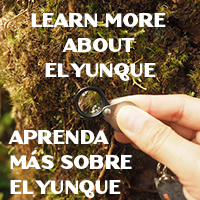